As I went through the website to the nonprofit organization my grandfather created in 1965, I was taken aback at the similarities. The most astonishing was this excerpt from his autobiography from 1972. It made me realize that we have a lot more things in common then I could have imagined…

‘For the benefit of any of my readers who have never experienced any mental illness, I must attempt to describe those years. The world became a fearful place. People and situations caused panic. For me to use a telephone was a particularly terrifying experience. I was filled with fear, and resentment, ungrounded, irrational, impotent rage, turned especially against those I most wanted to love.

In a way, I suppose that this illness really functioned us my religion in those days. It was the thing around which much of my life was organized. It determined my outlook on life, my attitude toward people. It prevented me from doing anything effectively or well’. Edwin B. Stube

Despite his inner struggles my grandparents moved to Indonesia along with their 6 children in 1965 to build christian community centers all over Indonesia. A month later my grandmother was diagnosed with Multiple Sclerosis but they carried on their mission and after 12 years they returned to the states to get her additional medical attention as the condition worsened before her eventual passing.

I read many cataloged newsletters which were very similar to the approach I use with my blogs. They detail events, emotions and lessons learned. What a blessing to get a sense that I am carrying forward the work of my grandparents in my own way.

My grandfather Edwin B. Stube with a kind smile 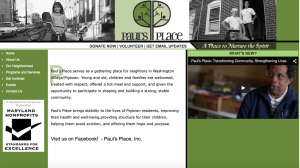 The community center he created in the inner city of Baltimore, Maryland in 1982.

My grandfather’s charity archived letters and articles from their work. Looks a bit like an old fashion version of my blog.

The Reverend Edwin Stube served as an Episcopal priest in parishes in Montana, in Western Maryland, and in Baltimore. He and his family also spent twelve years in Indonesia where they established THE HOLY WAY mission, that trains young nationals for evangelism and church planting. This work has now expanded and has many mission centers across the nation. Edwin Stube established a reputation as a teacher of the Bible and systematic theology.  He returned to God the Father in February 2001, but his spiritual inheritance continues to grow.